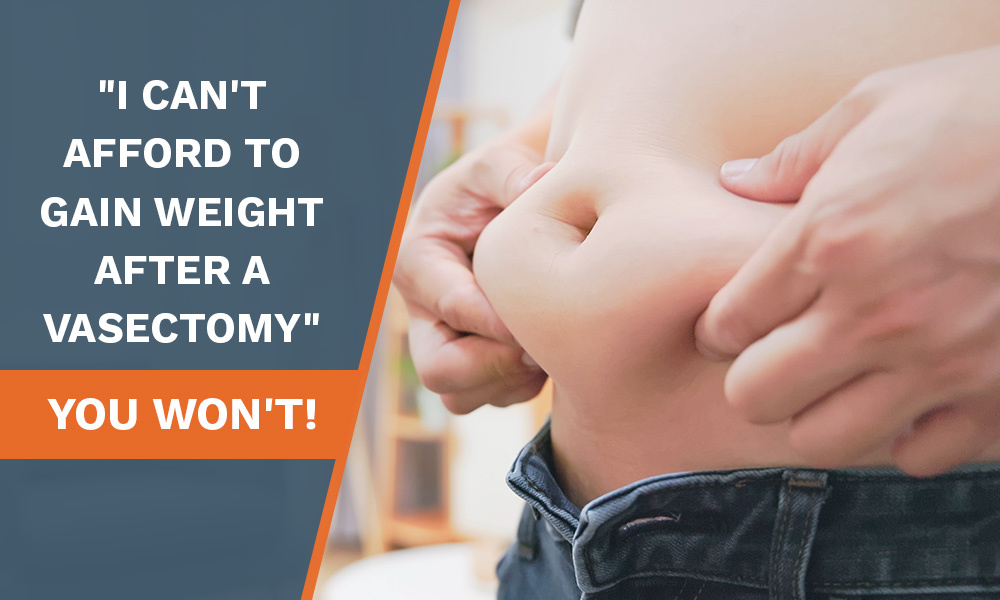 Will I gain weight after a vasectomy? You won’t! 26 Aug

A vasectomy is a popular method of permanent birth control for men who do not want any more children. There are several misconceptions about vasectomies. Contrary to what you may have heard, a vasectomy does not decrease your sex drive, nor does it affect sexual function. You don’t have any higher risk of diseases later in life if you have a vasectomy. Learn the facts to understand why you won’t gain weight after your vasectomy in Montreal. There could, of course, be other reasons you may gain weight, but your vasectomy will not be the one to blame!

What Happens in a Vasectomy?

Sperm is produced in the testicles. It travels through the vas deferens to the penis. During intercourse, when the male ejaculates, the sperm can fertilize the ovum in the female’s body. A vasectomy prevents this from occurring. Vasectomy is often referred to as male sterilization. In a vasectomy, the surgeon cuts the vas deferens, the tubes that carry sperm to the semen. A man can still ejaculate, but there is no sperm in the semen. Only a small amount of the volume of semen is made up of sperm, so you shouldn’t notice any difference in your sexual function.

One of the most common questions about vasectomy is, “Will I gain weight after a vasectomy?” A vasectomy does not make you gain weight. What can affect your weight is if your lifestyle after the vasectomy changes and negatively impacts your weight. A vasectomy doesn’t make a man feel less masculine or less productive. The hormones produced by the testes are not impacted by a vasectomy. In fact, your body still produces sperm after a vasectomy. The only difference is that it has nowhere to go, so your body absorbs the sperm. You will still produce testosterone, which regulates muscle mass and strength.

Get Your Questions About Vasectomy Answered

Vasectomy is one of the most effective birth control methods. It is safe and effective. If you still have concerns about vasectomy, the best way to understand how it will affect you is to talk to an experienced doctor who can give you the facts. Make an appointment to discuss a vasectomy in Montreal with Dr. Jean-Philippe Bercier.