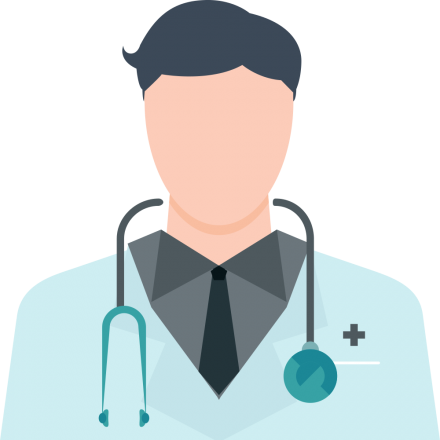 As vasectomy becomes an increasingly popular means of birth control, the frequency of vasectomy reversal—the recovery of sperm in the semen—is also increasing. Vasovasostomy is an effective and safe procedure that restores sperm to allow ejaculation.

The testes can still produce sperm after vasectomy. However, sperm cannot exit as usual, since the vas tubes have been blocked. On each side, sperm can still enter the epididymis—the long-coiled tube behind the testis where sperm normally become mature—and the lowermost portion of the vas tube. Two possible reasons can explain why the fine tubes of the epididymis may become blocked after vasectomy.

The epididymis may be obstructed after vasectomy because of upstream pressure from the vasectomy site, causing a “blowout” in the thin tubes of the epididymis and resulting in sperm leakage, local inflammation, and blockage. 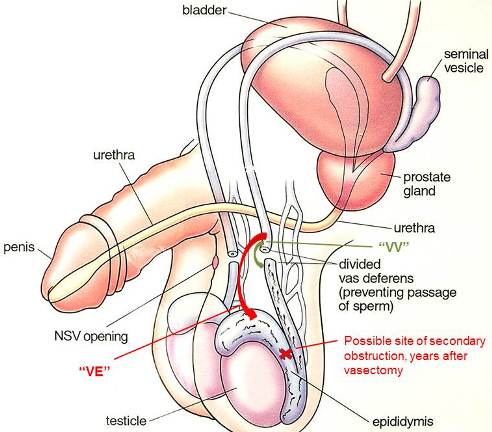 Irrespective of obstruction cause, the likelihood for obstruction is roughly proportional to the number of years that passed since the vasectomy. For instance, after a one- to three-year interval, the epididymis is rarely blocked. However, after a 20-year interval, the likelihood of secondary obstruction may increase to 40%. Fixing the vas where it was divided at the time of the vasectomy (vasovasostomy or VV) will not correct the secondary obstruction upstream in the epididymis. This requires a more elaborate procedure called vasoepididymostomy  (VE), in which the portion of the upper vas tube is connected to the portion of the epididymis.

Vasovasostomy (VV) and vasoepididymostomy (VE) are not the same operation. Because VV reconnects the vas where it was severed at the time of vasectomy, it is considered a true “reverse vasectomy.” VV can often be performed by lifting the vas tubes out of the scrotum through a small incision, just as they were lifted out at the time of the vasectomy. The vasectomy site will be either a gap or a nodule (lump); either way, both ends of the vasectomy site will be freshened and sutured. The left and right sides can usually be repaired in turn through the same ½- to 1-inch vertical incision in the centre of the scrotum, all under local anesthesia in a doctor’s office. With the help of magnification using optical loupes or a microscope, 8–12 sutures are used on each side. The operation takes three to four hours.

Firstly, since the epididymis is attached to the testes, VE requires delivery of the testes. In other words, the testes must be taken out of the scrotum while the connection between the epididymis and vas is made. This procedure requires a larger incision larger than that of VV.

Secondly, the portion of the vas between the vasectomy site and the epididymis is not used, so the gap that must be bridged is longer. The upper section of the vas must be “mobilized” to provide the required length. To carry out this procedure, surgeons must usually make two incisions on the left and right, which can be extended toward each groin to allow the higher portions of the vas to be dissected and loosened.

Finally, the epididymal tubes are smaller than the vas tubes. A microscope must be used because the connection between the vas and epididymis in VE is often weaker than the connection between vas and vas in VV; the success rate of VE is not as high as the success rate of VV. A VE is more technically demanding than a VV; some surgeons who excel at VVs may not perform VEs as frequently to be comfortable with them.

What group of men need a VE?  It is confirmed that the likelihood of a secondary obstruction in the epididymis is greater when the year interval between vasectomy and reversal is longer. But some men have secondary obstruction after only two years, and some do not have it after 30 years. Wouldn’t it be nice if we could determine with certainty what group of men need a VE before surgery? Unfortunately, we cannot. Physical exams, ultrasound, CT or MRI would not help, either.

But physical exams may provide a few clues.

Some surgeons believe that high vasectomy sites—sites away from the testes— are a good sign, as more vas on the testis side absorbs the back pressure.

To solve the dilemma, there are three approaches to vasectomy reversal.

Surgeons may perform a bilateral VV through a single incision in the office or in a facility, regardless of the lower end fluid findings, because (a) most patients have good lower end fluid findings and do not need a VE; (b) some patients appreciate the return of sperm to the semen to cause a pregnancy even when lower end findings are adverse; and (c) VVs are technically less demanding and more likely to remain open than VEs.

Surgeons may perform all reversals under general anesthesia through two incisions in an operating room with a lab ready to accept sperm for storage. By delivering the testes, surgeons can work with excellent exposure and go right to a VE on one or both sides they feel would be better served with VE to increase fertility.

In the case of the first approach, the procedure fails when epididymal obstruction is observed on both sides (on average, this occurs about 17% of the time) and the full-fee patient procedure has not yielded any benefits. If patients choose to undergo a subsequent VE, the VV would have caused some scarring and loss of upper end length during the trimming and suturing process, making the subsequent VE more challenging. The chances of success are less.

With respect to the second approach, all patients pay the operating room and anesthesia costs even though most patients would have achieved success in an office environment. When even the most liberal criteria for performing a VE instead of VV are used, per a recent study, 75% of men in an operating room had a VV on both sides, while 8% had a VV on only one side. Since similarities between VV techniques used in the office and operating room are noticeable, the patients in this study may have enjoyed a return of sperm to the semen at a lower cost—a major consideration for an operation that is not covered by most insurance carriers.

The second approach has yet another problem: after the larger bilateral incisions, patient recovery may be longer than a single smaller incision. These patients may require more recovery time before returning to work. But because scrotal wounds heal quickly, recovery should not be a major obstacle.

The final approach addresses the problems in the first and second approaches. The solution? Patients undergo their procedure in the office.

This step explores one vas on the testis side of the vasectomy site with a small midline incision. This lower end is opened; the fluid, evaluated. If findings are favourable, VV is carried out. If findings are unfavorable because of an absence of fluid or thick fluid with no sperm, no connection is made; the patient is charged an exploration fee lower than a VV fee. The upper end is left unharmed and scarring is minimal. The patient can undergo a VE and sperm harvesting in an operating room at a later date. If the lower end fluid findings are equivocal (watery or thin fluid but no sperm), the patient and doctor can decide whether to proceed with VV The same step is repeated on the other side. Regardless of the interval between vasectomy and reversal, most patients will have favourable findings on both sides, will have a VV on both sides, and will experience a return of sperm to the semen.

The third approach is the most sensible for men whose intervals are short (less than 10 years) and physical findings are favourable. Why spend thousands of dollars on operating room and anesthesia costs when the likelihood of success with an office procedure is great? The second approach may be reasonable when the interval is longer.

American vasectomy reversal success statistics are readily available. The most cited article is the report from the Vasovasostomy Study Group that appeared in the Journal of Urology in March 1991 (J Urol 145:505-511, March 1991).  Our technical success rates compare favourably with these statistics.

The single most important parameter determining success is the number of years since vasectomy. Within the first three years, we have seen reversal results in sperm recovery in over 97% of cases; three to eight years, about 91%; 9 to 14 years, about 82%; beyond 14 years, about 69%. Overall, this percentage sits at 85% when we consider all patients who seek vasectomy reversal.

In addition, no standards for reporting pregnancy rates are set. Some offices will report a pregnancy failure in a couple only if pregnancy has not occurred within two years of the reversal.

In our office, however, we report a pregnancy failure within one year.  Pregnancy rates will “look” even better for those offices that do not include couples as pregnancy failures until three years after the reversal, and so on.

Dr. Bercier will not charge fees for the initial consultation if it takes place in Ottawa or Hawkesbury. In this consultation, Dr. Bercier meets with and examines the patient, provides further details, and answers any questions. A ten business days period is required to cancel or postpone the consultation.  Otherwise, a $80 fee will be charged to your credit card.

The vasovasostomy procedure costs $5,000, including all follow-up visits. Since an entire day is dedicated to one procedure, a $1,000 deposit is required seven days prior to the procedure. The remaining balance is due on the day of the procedure.

Why does your procedure cost less than other local reversal clinics?

Since vasectomy reversal is performed in the office, facility fees are not charged. And, because vasectomy is done with local anesthesia, patients need not pay anesthesiologist or nurse anesthetist fees. 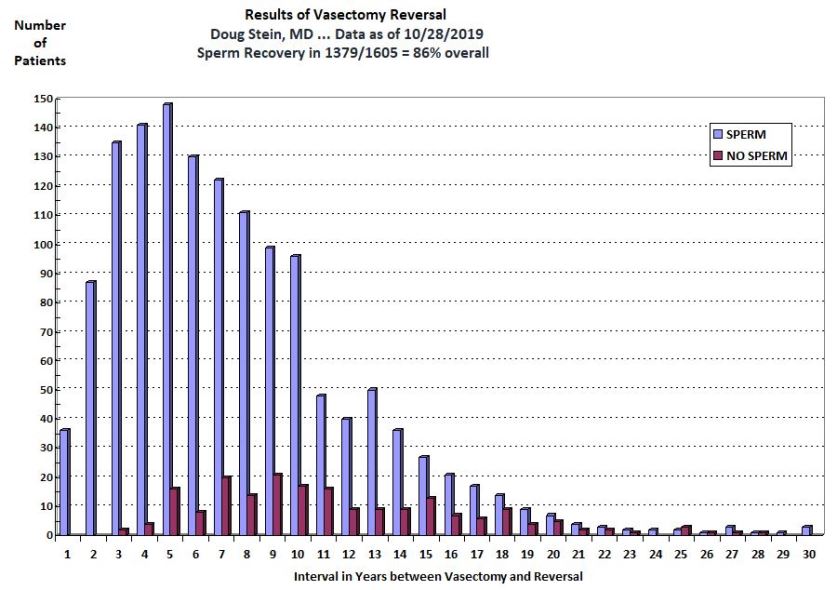 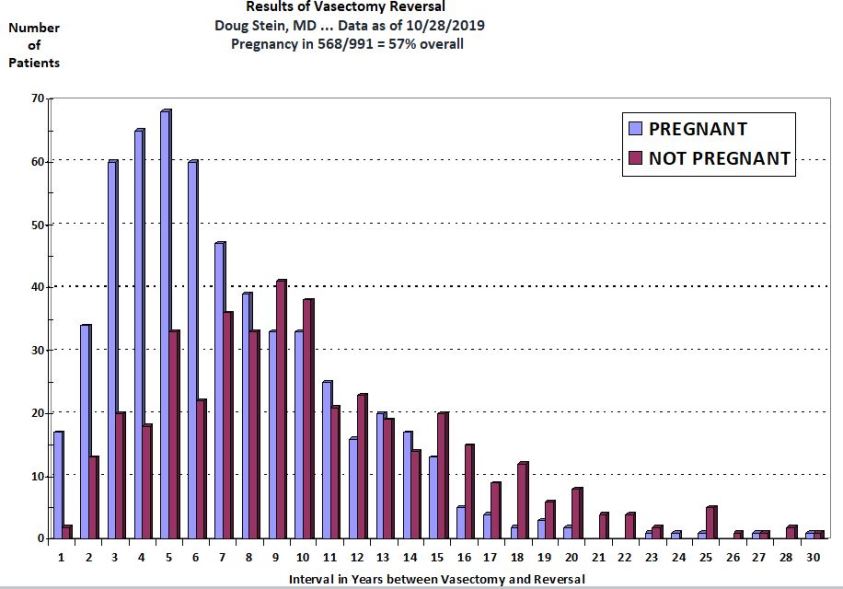